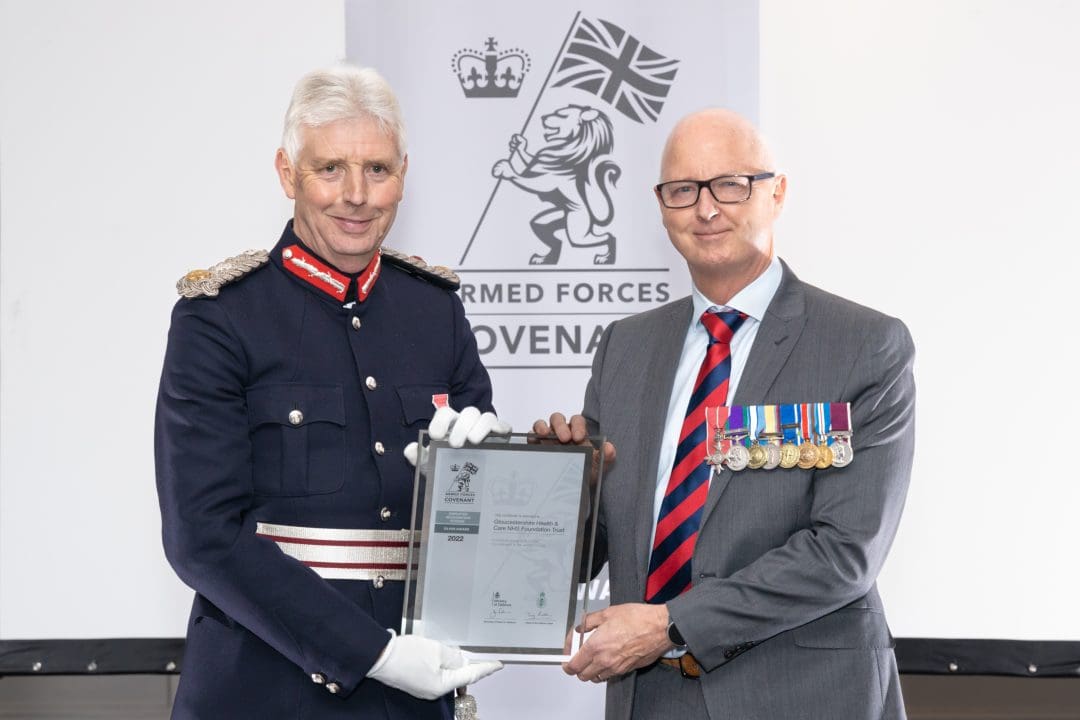 Our Trust celebrated the news earlier this year that it had been awarded the Defence Employer Recognition Scheme (ERS) Silver Award, in recognition of its commitment and support for defence personnel.

Through this process, Gloucestershire Health and Care NHS Foundation Trust pledges to support the armed forces, including existing or prospective employees who are members of the community. The award comes after we signed up to the Armed Forces Covenant in December 2019, which demonstrates the fact that GHC is armed forces-friendly and open to employing reservists, armed forces veterans (including the wounded, injured and sick), cadet instructors and military spouses/partners.

Our Trust’s commitment to driving improvements in NHS care for defence personnel and their families was further recognised in May last year, when it was named a Veteran Aware Trust.

Pictured receiving the award at last Thursday’s event is veteran and GHC’s Lead for Employment of Veterans and Reservists, Andrew Collins-Mills MBE.

Speaking after the event Andrew said: “I was honoured to have represented the Trust at the awards ceremony and delighted that we have been recognised with this Silver ERS Award.

“We will continue to develop our relationship with the Armed Forces and look forward to striving towards gold award status in the near future.”

Thursday 1 December is World AIDS Day - a global campaign by the National AIDS Trust which aims to help prevent new cases of HIV, secure the rights of people living with the condition and continue the fight against the stigma surrounding it. According to the...