What is domestic abuse?

Behaviour is ‘abusive’ if it consists of any of the following: physical or sexual abuse; violent or threatening behaviour; controlling or coercive behaviour; economic abuse; psychological, emotional or other abuse.

This behaviour can consist of a single incident or a course of conduct. Further detail is provided to detail how ‘personally connected’ would be defined and children are now recognised as victims of domestic abuse here: Domestic Abuse Act 2021 (legislation.gov.uk)

It is important to note that domestic abuse is complex and there is overlap in the different types of abuse; it could consist of one or more forms of abuse. Domestic abuse can happen to anyone.

This year locally, the focus will be on raising awareness of what constitutes domestic abuse. A variety of agencies and organisations have plans during the 16 Days of Action, including training and awareness raising events. Please find below details of just a few of the things going on throughout the 16 Days. 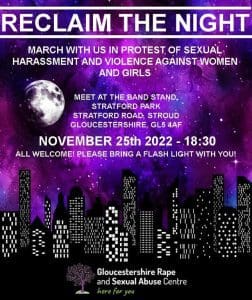 Gloucestershire Rape and Sexual Abuse Centre (GRASAC) will be holding its Reclaim the Night march in Stroud this Friday (25 November).

GDASS has a number of training events planned:

As part of the 16 Days of Action the GSCP are running a webinar on Suicide and Honour Killing Timelines, presented by Professor Jane Monckton Smith, University of Gloucestershire.

To find out more and to book a place on the webinar, click here>

FearLess is a charity working across Gloucestershire, Wiltshire and Devon, whose primary aim is to break the cycle of abuse. It supports adults and children who are experiencing, or have experienced, domestic violence, sexual violence and stalking.

The charity is encouraging people to join its 16 Day Challenge (from 25 November to 10 December), with the goal of each raising £160. Visit the FearLess website to find out more>

The Nelson Trust is a charity which brings belief, hope and long-term recovery to people whose lives have been torn apart by addiction and the multiple and complex needs that come with it. It provides residential addiction treatment to men and women and supports women in the community who are in contact with the criminal justice system.

As well as holding a host of groups whose focus will be on domestic abuse throughout the 16 Days, the Trust will be starting a brand-new group called Pattern Changing, for women who have experienced an abusive relationship. Visit the Nelson Trust website for further information.

Support on offer in Gloucestershire

Support for young people (under 16)
www.gdass.org.uk/support-for-young-people

Hope House Sexual Assault Referral Centre (SARC) joins you in standing up, speaking out and saying NO to violence against women!

Hope House SARC is a service in Gloucestershire offering emotional and practical support as well as medical care to anyone who has experienced sexual violence or sexual abuse.

Clients are offered its services based on their individual needs and can choose to use as much or as little of the SARC’s service as they wish.

Clients can access Hope House SARC via the police and other professionals. Clients can also contact the SARC directly for confidential advice or to arrange an appointment without police involvement, by calling 0300 421 8400.

The SARC also offers information and support to friends and family, and is available 24 hours a day, 365 days a year.

To find out more visit the Hope House SARC website>

Keep an eye on our Facebook and Twitter channels for updates and information on the various activities and events planned by local agencies throughout the 16 Days campaign.

Thursday 1 December is World AIDS Day - a global campaign by the National AIDS Trust which aims to help prevent new cases of HIV, secure the rights of people living with the condition and continue the fight against the stigma surrounding it. According to the... 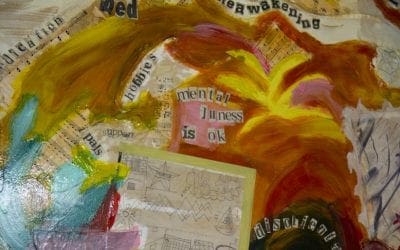