It was never my intention to become a nurse. Aged 18, I wanted to be a social worker, and I was recommended to come back when I was 21.

I signed up to be a healthcare assistant on a hospital respiratory ward; it was a wonderful location, with beautiful grounds and peacocks!

Then, I was offered a place on the Registered General Nurse course at the Gloucestershire School of Nursing, and I’ve never looked back, remaining in Gloucestershire for all of my career.

It was a fantastic community. You were an employee of the trust, with a guaranteed post at the end of training, and it’s interesting how things are now going full circle, with the introduction of apprenticeships and offers of posts earlier and earlier before qualifying.

It was quite formal. Everyone was addressed by their surname and uniform was often inspected by the nursing officers.  I remember when my first ward manager received a computer and didn’t know what to do with it; I heard some interesting language coming from the office that day! While systems come and go, we are now in a position, some 35 years later, where we are starting to share information across different organisations.

I remember my first afternoon at Gloucestershire Royal ward 13 medicine.  There was a cardiac arrest and everyone came running. Sadly, the gentleman did not survive.  I was introduced to doing last offices for a gentleman I never knew and this has been a lasting memory for me, as it was such a very personal things to do, and the last dignified thing you can do for someone.

During my training, I had a placement at Coney Hill Hospital, on a long stay rehabilitation ward.  I took a group of patients on holiday for five days and had a large box of medication that needed to be administered daily.

My first job was in surgery at Gloucestershire Royal Hospital ward 8 gastric.  I loved the fast pace of surgery.

I changed direction in my career, as I was concerned about patients’ mental health ahead of their surgery.  While we now have pre-op clinics, then people were often brought into hospital days before their operation.  This inspired me to undertake my RMN qualification as I thought we could do so much more for patients’ mental health to prepare them for surgery. Eighteen months later I was a dual qualified nurse.

I stayed in psychiatry and did not return to adult nursing.  I did briefly do bank shifts to keep my skills up to date, but as a parent, this was not sustainable.  I was always dedicated to my passion of nursing and only had six weeks off for maternity leave and went straight back to full time hours.  I found I was missing my work within days.

I spent a long period of my nursing career in psychiatric rehabilitation homes, within the community setting, with patients with a serious mental illness.  As the large psychiatric hospitals were closing, people returning to the community became the new normal.  I became a deputy head of home within one year of qualifying, where I learnt the skills of truly holistic person-centred care.

I would work night duty across Gloucestershire peripatetically, as the only qualified nurse across five homes.  In the ‘90s the, homes started to be decommissioned, with the progression of newer services.  I returned to the psychiatric hospital to refresh my skills of inpatient care as there was to be a new ward with ‘hospital status’ in the community, housing patients sectioned under the Mental Health Act.  Once this was up and running I decommissioned the last home in Gloucestershire.

I then worked for former East Gloucestershire trust from 2000. When I joined, the same process that of decommissioning was taking place and, within a year, I decommissioned the home I was managing in Cheltenham.  I then ran a 20-bed dementia ward and learnt about a lot about change management and governance.  I entered the building and the ward was facing a lot of challenges. When I left a year later, there had been improvements in all areas.

I returned to working with adults with serious mental illness, managing a community rehabilitation team.  The objective at that time was to discharge patients back to their GP. We opened a purpose-built recovery unit in the community, which is still in operation now.

I also set up the first Assertive Outreach Team in Cheltenham, Tewkesbury and the North Cotswolds, to deliver a seven-day service for patients with serious mental illness, forensic histories or those detained under the Mental Health Act. This required true engagement with all areas of living and family work.

The highlights of my career have been making a difference to patients’ and carers’ lives.

I moved on to become an operational manager with increased responsibility, before becoming the modern matron at Wotton Lawn Hospital. This was a pivotal time in my career, and I faced a lot of challenges in the running of the hospital, but I found the best thing about being a matron is that the first and last person you see every day is a patient.

Community nursing has always been my passion, and I returned to this in the role of Community Services Manager, before being appointed as Deputy Director of Nursing in the former 2gether NHS Foundation Trust. When we merged with Gloucestershire Care Service NHS Trust, I became Head of Nursing and Quality of the newly formed Gloucestershire Health and Care NHS Foundation Trust.

I believe the following qualities have shaped my career:

If I could give one piece of advice to those embarking on careers in nursing, it would be to be kind; demonstrate true kindness every day. 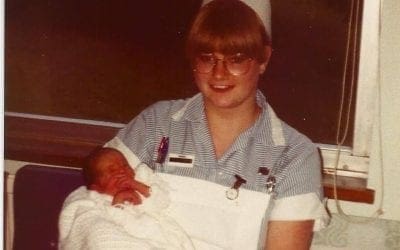 I started my training to become a Registered General Nurse (RGN)  three weeks after my 18th birthday, on Monday 5th May 1980 at the Royal South Hants Hospital in Winchester. I thoroughly enjoyed every minute of my training, even though we were terrified of matron! I...