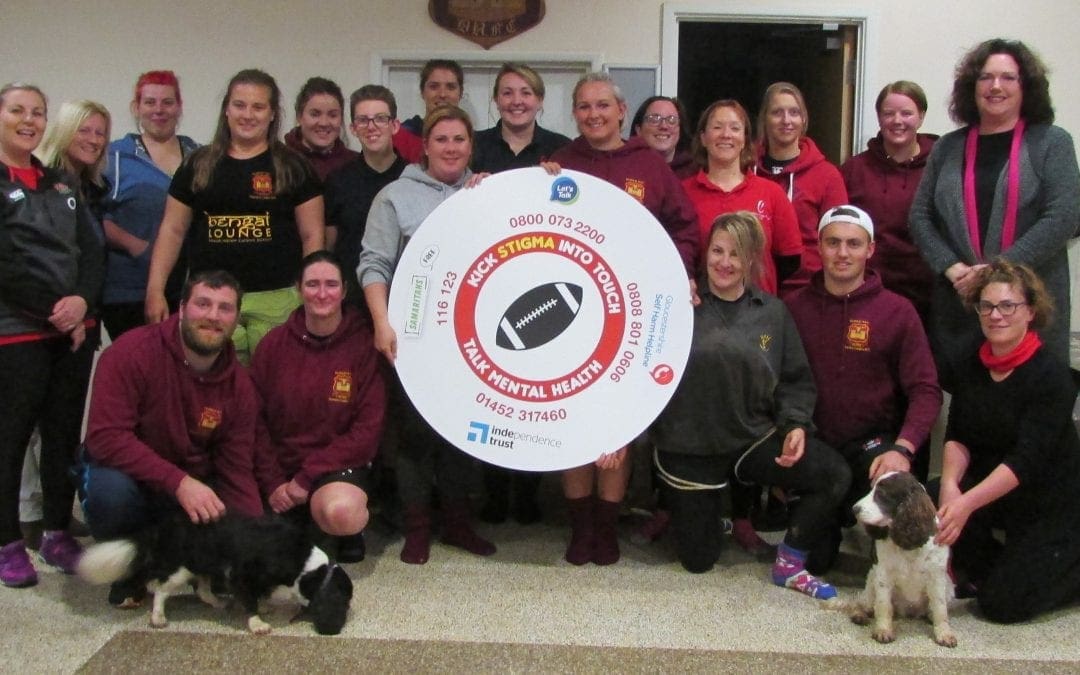 Dursley Rugby Football Club has joined forces with the Gloucestershire Tackling Stigma partnership, a multi-agency group which works to reduce the stigma around mental illness.

The group, which meets regularly, has a focus on raising awareness of mental health issues and tackling stigma within sport.  As part of this, the group has produced a series of themed stickers and is working with a number of National Governing Bodies and sports clubs to spread the word.

Jane Bullows, Sport and Health Development Manager at Stroud District Council, is one of the representatives of the Tackling Stigma group. On visiting Dursley RFC she said: “We know that one in four people will experience a mental health issue at some point in their lives and we want to encourage them to feel more safe, supported and able to talk about their feelings.

“Sport is known for its inclusivity and we aim to encourage sports clubs, whether it be spectators, players, coaches or officials, to be more aware of their mental and emotional wellbeing and to know where to gain further support. Dursley RFC is a great proponent of a positive and proactive club and the first to show their support for this campaign.”

Melissa Bundy, aged 31, plays front row for Dursley RFC ladies’ team. As someone who has experienced mental health issues, she understands the importance of tackling the stigma around this area.

She said: “I suffer with depression and anxiety, so going to the club when I joined was a massive thing for me.

“But I was welcomed with open arms and now these ladies are more than just team mates; they are my mates and my extended family. The game and the club has made me more confident about myself and I look forward to the future of Dursley ladies.”

Nicola Davies, Marketing and PR Officer, Dursley RFC, added: “Sport has long been promoted as a way to look after your physical health, but it’s also proven to have a positive effect on your mental health as well.

“Our club is a community where we want everyone to feel safe and supported, able to discuss how they are feeling without any stigma or fear of repercussions. We fully support this campaign to kick mental health stigma into touch.”