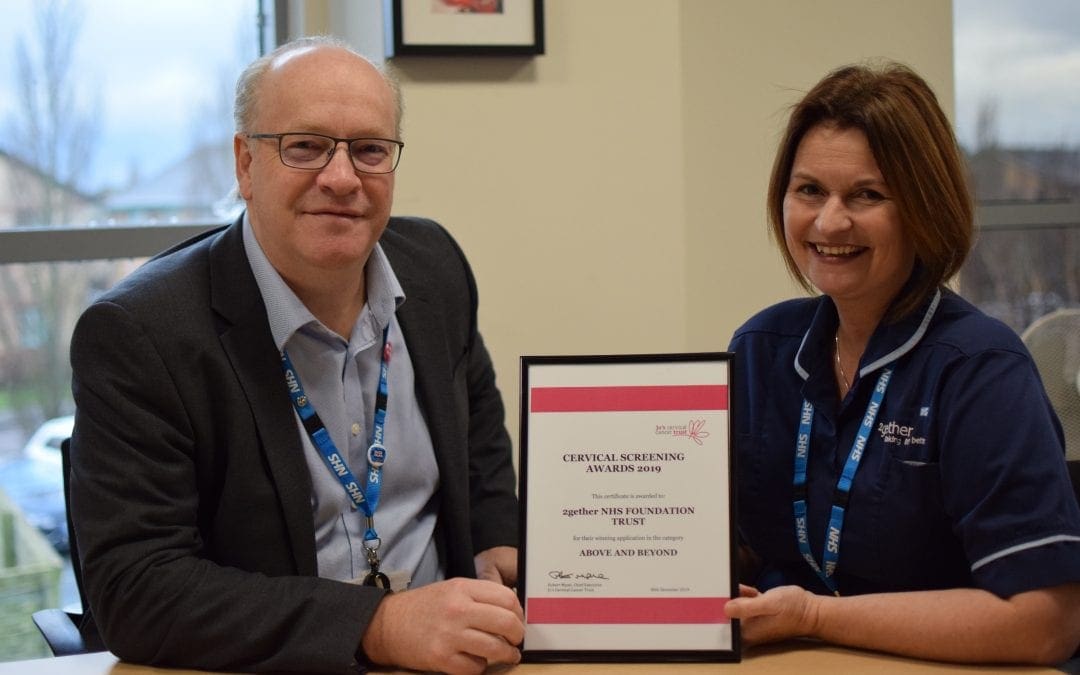 A project in Gloucestershire aimed at improving access to cervical smear tests for women with mental health problems has been recognised with a national award.

Well Woman Wednesdays, a collaborative programme between physical and mental health practitioners at Wotton Lawn Hospital, won the Above and Beyond category in the Cervical Screening Awards run by national charity Jo’s Trust.

The initiative has allowed women to access a well woman check-up including cervical screening within the hospital environment. Barriers to screening have been removed by offering a bespoke service for patients in a familiar setting, with a staff member they are familiar with in a no pressure environment.

An audit of cervical screening rates on Dean’s Ward prior to the programme showed around 45% had been tested, but that rose to 72% after the introduction of Well Women Wednesdays, which were commended for being ‘forward thinking’ and an example for others to build on.

Angela Willan, a physical health nurse at Gloucestershire Health and Care NHS Foundation Trust who set up the initiative last year, said: “Colleagues at Wotton Lawn are always looking for ways to improve their patients physical health care, so special thanks must go to the staff of Dean Ward who embraced this initiative and have shown constant support and commitment.”

It often requires a focused and personal plan before patients with mental health problems will consider the test, and Angela said she and her colleagues had agreed to some unusual requests to ensure women were relaxed and comfortable.

She added: “For example, one patient agreed to be tested but only on the condition that we had her favourite choice of music playing in the background – so that’s what we did! We’ve done all we can to ensure that we look out for the needs of each individual.”

Paul Roberts, chief executive of the Trust said: “Angela’s work is a perfect example of the way in which we can provide an improved service through better co-ordination of physical and mental health care. I’m delighted she has been recognised for this work, and I’m sure there are many more such opportunities to develop innovative, personalised care for the benefit of our community.”

Jo’s Trust is the UK’s leading cervical cancer charity. It runs national awards to promote testing, announcing the winners each year during cervical cancer prevention week, which this year runs from January 20-24. Nationally the number of women attending for cervical screening has been falling, and women with serious mental illness are less likely to attend.

Robert Music, Chief Executive of Jo’s Cervical Cancer Trust, said: “I would like to personally congratulate Angela and her team at Wotton Lawn Hospital for their commitment and their excellent work for a group of women who often find cervical screening very difficult.

“I hope that their work encourages others to invest in prevention campaigns. Their forward-thinking initiative provides an excellent example of what can be done locally to increase low screening uptake.”

Efforts to further increase uptake are already in place in Gloucester, with an expanded offer of cervical screening to community patients. Colleagues at Pullman Place, which is the base a number of mental health teams, have adapted their treatment room to allow the Trust to offer screening there.