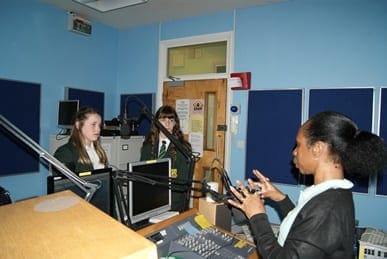 The winners of a closely fought competition to create a radio advert to raise awareness of dementia have been announced.

Year eight pupils at Newent Community School and Sixth Form put together an impressive collection of radio adverts to make the final of the challenge, alongside a pupil from Al-Ashraf Secondary School for Girls. ²gether NHS Foundation Trust was supporting the challenge, which was set by the Gloucestershire Black Minority Ethnic (BME) Network for Dementia, a multi-agency organisation which works to improve access to memory assessment and community dementia services for people from BME communities.

The pupils were asked to design a radio advert, lasting up to 40 seconds, targeting people in Gloucestershire, particularly those who are worried about their memory or someone else’s memory.

The competition was meant to have a winner chosen by ²gether NHS Foundation Trust, but because the five entries were so good, the trust decided to open it up to a public vote to decide the overall winner.

Dementia Awareness week takes place from 15–21 May, and this year will encourage people who are worried about dementia to confront their worries by addressing dementia directly.

The winner of the competition will have their radio advert played on GFM 96.6fm online www.gloucesterfm.com  during Dementia Awareness Week.

Rachel Peak, Dementia Education Facilitator at ²gether NHS Foundation Trust, said: “I want to thank everyone who entered the competition and congratulations to Abi and Ellie who won. All the adverts were truly fantastic and inspirational, making the final decision very difficult to make – so difficult that we decided to put it to the public vote.

“The competition has also been a great opportunity for us to raise awareness of dementia, and the importance of people from all ages coming together to make a change.”

The national project saw students in Gloucestershire of different ages training each other in dementia awareness; students from Gloucester College trained students from Newent Community School and Sixth Form, who then trained year 6 students from Picklenash Primary School.

The students at Newent Community School and Sixth Form entered the competition so that they could raise even more awareness about dementia among the public.

Di Harrill, Head of Personal, Health and Social Education at Newent Community School and Sixth Form, said “A massive congratulations to Abi and Ellie, the winners, and to all the students for their hard work and creativity in creating the adverts, and for their commitment to learning about and raising awareness of dementia.”

You can see part of the recording here.