Iain Cockley-Adams and Chris Boden bid farewell to their moustaches with a ‘big shave off’ at Brockworth Barber Shop, near Gloucester. They were two of eight colleagues who had agreed to grow a moustache as part of annual campaign, Movember, which aims to raise awareness of men’s health issues and prostate cancer in particular.

As well as publicising the campaign by growing a moustache, some of the men also fundraised for Movember. Chris Boden, head of podiatry, also supported four drop in sessions for staff who wanted information regarding men’s health issues, alongside Anna Gibbins, healthy lifestyle co-ordinator, who led the Trust’s campaign.

Anna said: “It’s been a really popular campaign, and I am grateful to my colleagues for volunteering to grow a moustache and take the jokes that went with their facial hair!  This year’s campaign has focused on the 350 staff who work from our main office in Brockworth. As well as talking directly to colleagues, we took a more ‘covert’ approach and placed Movember-themed information in the men’s toilet facilities. It’s been another way to promote the really important messages about men’s health and how men can self-check for prostate cancer. Likewise, we have targeted information for women to pass on to their husbands and partners.”

Chris added: “Men tend to be not the most forthcoming demographic when it comes to talking about health issues, so by leaving information that people could take anonymously, we were able to get our message across effectively to those who preferred not to speak face-to-face. I’ve really enjoyed taking part in Movember, although it’s certainly nice to be rid of the moustache and back to normal!”

Rich, from Brockworth Barbers, which donated free shaves for the Movember men, added: “We’re delighted to support this great cause, as it’s such a fun and light-hearted way to highlight what is a very serious subject.” 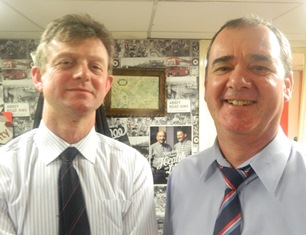