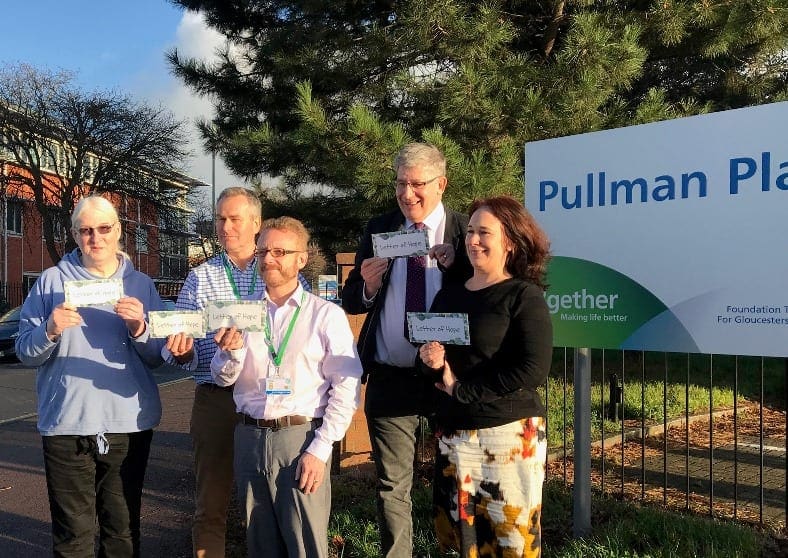 A ‘letter of hope’ is to be given to anyone arriving at Gloucestershire’s hospitals who has attempted suicide or is experiencing suicidal feelings.

The letter has been written by people who have also made attempts to take their own life, or who have supported family members who have made such an attempt. From their unique, personal perspective they are offering words of encouragement and sources of support.

Gordon Benson, of ²gether, said: “The Letter of Hope has been written by people who have been through the same or similar experience as people who arrive at our county’s hospitals, having had suicidal thoughts or having made an attempt to end their life.

“It’s a very personal letter that only people who have been through these experiences can really write. We hope that the people reading it will take comfort and see things in a different light than perhaps they would after speaking with a health professional.

“It took a great deal of courage for those who wrote the letter to share their feelings in this way and our wish is that it will have a big impact on the readers, ultimately making them feel that there is hope and that they have something to live for.

“We’re launching the letter at a time of year when things can be particularly difficult and we hope it will have a real and lasting impact on saving people’s lives.”

Rosie Gardener, 60, from Gloucester was one of the letter writers. She said: “Most of us who took part in this project have, at one time, attempted suicide. The project itself was a way of showing others that there is hope in times of total despair and that if we give it time then life will give us a second chance.

“Last year, two of my friends took their own lives. The feeling of total loss of those friends will always be with me.

Christopher Shellam, 65, from Herefordshire was another of the letter writers. He said: “When being discharged from A&E after suicide attempts I was never given a ‘Letter of Hope.’ That’s why this ‘Letter of Hope’ is so important because not only does it give hope, it shows others do care and have been in the position of wanting to end it all.”

He added: “This letter represents a genuine offer of compassionate support from people who truly understand how painful and isolated a mental health crisis can feel. The hope that recovery can happen is a vitally important factor in the most desperate times.”

Sophie Churchyard, Triage Nurse at the Vale Minor Illness and Injuries Unit, run by Gloucestershire Care Services NHS Trust, said: “This is a great initiative, giving people who need support something to walk away with that tells them recovery is possible. It’s very powerful and contains a fantastic amount of information all in one place.”