Among the hundreds of thousands of runners jostling at the starting line of the Virgin Money London Marathon on Sunday 28 April this year will be Gloucestershire Care Services’ very own Sara Force.

Specialist Nurse for Safeguarding Children, Sara will be running the 26.2-mile route in aid of Maggie’s, Cheltenham – incidentally, the Trust’s chosen Charity of the Year for 2019.

Maggie’s holds a very special place in Sara’s heart. The centre, in College Baths Road, Cheltenham, which offers free practical, emotional and social support to people with cancer, their families and friends, proved an “oasis” for Sara and her husband Steve following the devastating news in December 2015 that he had terminal bowel cancer.

“Maggie’s and the wonderful staff and volunteers who worked there became our lifeline over the coming months,” says Sara.

“Every gruelling chemo was softened by a cup of tea and some kind words at Maggie’s. They were always there for both of us in our darkest days. When hope ran out, they gave us space to cry and the wonderful counsellor helped Steve to prepare his goodbyes by writing letters to our sons James and Matt.

“This is why I am running the London Marathon for Maggie’s. I could have chosen a charity with a less ambitious fundraising target, but Maggie’s is a place I would want everyone to have access to if ever they were in this situation.”

Sara has hosted a number of events to help raise money for the Cheltenham charity, including a cake sale at Kingsway Parkrun, a ‘Paint Your Own Pottery’ session at Dixie Dot Crafts and an autumn fayre at Gloucester Farmers Club. These events, coupled with pledges received via Sara’s Virgin Money Giving page, have realised an incredible £3,508.24 to date – £3,810.49 with Gift Aid.

Sara runs with Angels Running Club – the only affiliated female running club in Gloucester.  “They have been a huge support to me over the past few years,” she says.

“I am also a member of Widowed and Young (WAY), which supports people who are widowed under the age of 50. We have set up an informal running group and regularly do parkrun together – a fellow member of WAY is also running the London Marathon this year.”

Sara, who has been running for about 17 years, has lost count of the number of running events she has taken part in. “There are too many to remember really,” she laughs. “The highlights though have to be the Edinburgh Marathon, which I ran in 2009, and a 1,000 mile challenge in which I participated in 2015 – the year before Steve became ill – for which I ran 1,000 miles in a year. That year I ran three half marathons – Forest of Dean, Tewkesbury and Stroud.

“In 2016, when Steve was ill, I ran the Race for Life with a group of Steve’s colleagues from GRH (he was a nurse in Recovery). The team was called Steve’s Angels (see picture below).” 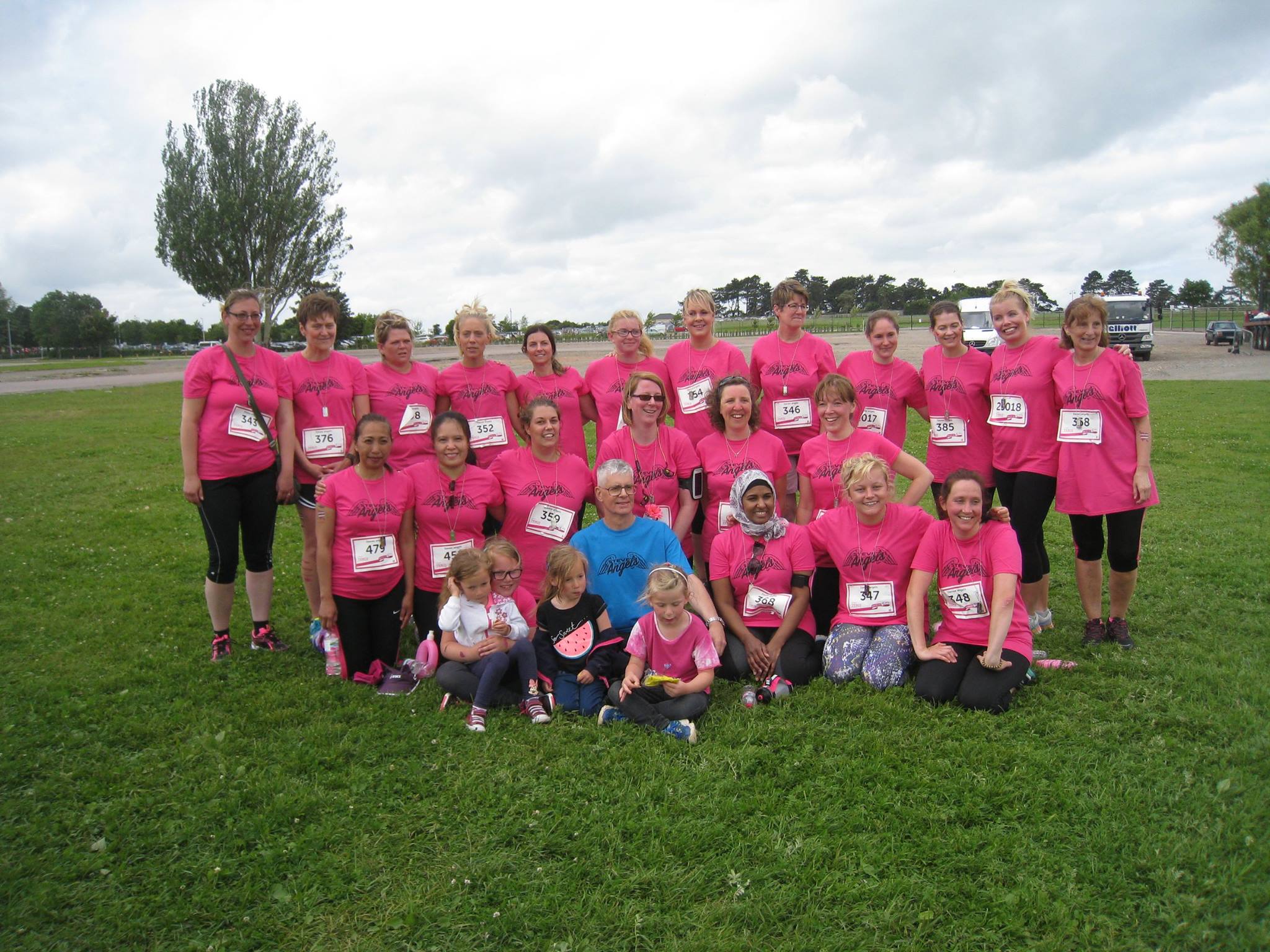 Sara has embarked on a strict 16-week training regime in preparation for the London Marathon. “I run four times a week, with a long run on Sundays,” she says.

“I’m currently up to 11 miles on the long run. Over the next few weeks I will be doing longer runs of 12 miles, 14 miles and 16 miles; then I’m taking part in the Bath Half Marathon on 17 March. Two weeks after that I will be doing a 20-mile preparation race.

“I also do strength training twice a week and yoga once a week.”