The ward, which usually provides rehabilitation care, was recognised for the work done to support both its own staff and families of patients as beds were repurposed to care for end of life patients who were Covid-19 positive.

The hospital transformed its services over the course of a week in March, with all staff groups asked to volunteer on the ward and trained in manual handling and SystmOne, end of life care, PPE, and the constantly evolving infection control requirements.

Working patterns were also changed with shorter shifts, more breaks, a buddy system, and a rota to ensure 24-hour support from the hospital’s management team.

Alongside these changes, staff also created a new team to ensure regular and frequent communication between patients and their families as infection control processes restricted visiting. They were pro-active in making contact with families and scheduled daily phone calls, Skype calls on iPads (supplied by the League of Friends) or collected messages that were read to patients by ward staff.

Following short-listing, Theatre Manager James Willetts, Theatre Sister Lisa Ryland, and Matron Julie Ellery presented the hospital’s work to the CHA on Friday 4 December and the hospital was announced as joint winner in the ‘Innovation and Best Practice related to Covid-19’ category on Wednesday 9 December.

Julie said: “It was lovely to be short-listed, but it’s even nicer to have won!

“It’s been a fantastic team effort, and it’s only fair that I give a mention to as many people who’ve been involved as possible including redeployed staff from MSK physiotherapy and North Cotswold Hospital, colleagues from theatre, outpatients and minor injuries, our housekeeping and admin team, trainers, former nurses coming back from retirement, infection control, estates, pharmacy, local chaplains and undertakers, and the mental health team.

“We’ve also had community support with hand-made bags and donations of food, drinks, and cake and I couldn’t be prouder of everyone at the hospital, and associated with it, for their efforts through the year. I’m sure this will put a little extra smile on our faces over Christmas.”

The Innovation and Best Practice Awards have been running since 2000 to recognise changes in practice that benefit patients or staff. 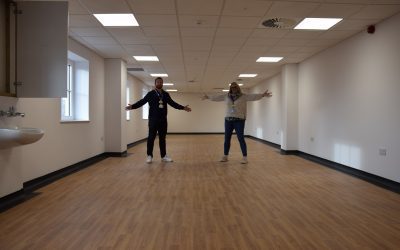 Stroud’s Podiatry and Adult Physiotherapy services have moved into the new £6.5m medical centre which recently opened in the town centre. Gloucestershire Health and Care NHS Foundation Trust has moved both teams into the top floor of the Five Valleys Medical Practice,...